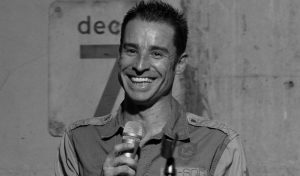 This episode we are joined by London based stand-up comedy MC and room runner  Alfie Noakes.

We discuss what is an Open Mic in the comedy world, from the beginners starting out to the training ground of the big comics.  Why it is a controversial, but also a very important space.  Both Alfie and Dave have spent many years plugging their trade around the open mic scene and bring some fascinating insight into that world, every lesson learnt the hard way, a room full of people staring back blankly when what was supposed to be funny, wasn’t!

Alfie also runs the We Are Funny Project, which provides comprehensive online courses and 1-to-1 coaching sessions for stand-up comedians at all levels of experience.

Alfie has just released a teaser of his new course “How to be a Brilliant Stand-Up Comedy MC” on his channel, until May 4th. It will be available again later in the year with the course for aspiring or new comedians with a £60 discount for the bundle.

Alfie has also promised to release a long lost Bill Hicks interview when the channel reaches 1000 subscribers, lets get subscribing.

You can also find some Chortle articles written by Alfie here:

Comedy must be diverse to counter Trump’s divisions

Enough with the faux outrage